The crumhorn is a double-reed wood-wind instrument with a cylindrically bored curved tube that's finished with a conical bell. The double-reed resides in a windcap. Crumhorns have eight small fingerholes including a hole for the left thumb. Lowest tone is handled with a key on large instruments. Their small fingerholes enable cross fingerings. Crumhorns have a scale range of a major ninth and can be chromatically played except minor second above their lowest tone. It wasn't considered to overblow them. Lowest tones can be underblown on the bass crumhorn and the great bass crumhorn. Underblown tones sound a fifth lower than fingered by lowering blow pressure a little bit. This extends scale range of these instruments by a fifth down, but control of underblown tones is very difficult. Modern instruments have one or two keys to extend scale range to higher tones. The first key is handled by left forefinger and extends scale range by one tone to a major tenth. The second key is handled by left thumb an extends scale range by an additional semitone to an eleventh. The second key enables first overblowing of lowest tones into the twelfth too. Crumhorns have a large range to slide tones in relation to the European wood-wind instruments. This allows to exactly tune tones especially in a crumhorn ensemble but exact tuning of tones is greatest difficulty by playing crumhorn. Modern crumhorns allow to slide their highest tone handled by both keys up to one semitone. If the second key is used and specially blow pressure is modulated some squeaking tones can be played. Moreover the three lowest tones can be influenced in this way that key-note and their twelfth sounds together. Tones described here don't typically sound for crumhorn. So they can only be used for modern music or sound effects. These special tones can be produced well with a hard reed which is suited for solo crumhorn too. Softer reeds are mostly played in a crumhorn ensemble because they enable an easier tuning of tones.

Name "crumhorn" leads away from a medieval instrument. This instrument has a cylindrically bored straight tube that's finished with an animal horn (from cattle or goat) as bell. This kind exists still today as the chanter for some bagpipes, e.g. the "gaide" and the "bock". Another version of crumhorn has a cylindrically bored straight tube. A short tube is rectangularly mounted at this lower end. Another short tube is mounted at that free end rectangular to the first short tube and parallel to the long tube. This short tube is finished with a large bell. This construction avoids technically difficult curve of tube.

Crumhorns shown above (without keys for higher tones) are typical instruments of the Renaissance and were developed in the 15th century. Crumhorns were build in imitation of vocal quartet with soprano, alto, tenor and bass as a whole family like most instruments of the Renaissance. Sporadically some higher and lower sounding instruments were build. Only sizes from sporano to great bass have come to stay. They have following scale ranges without overblown and underblown tones (tones played with keys on modern crumhorns in brackets):

Crumhorns sound as written like most of the Renaissance woodwind instruments (cornamusa, dulcian, rauschpfeiff, shawm, bombard, chalumeaux). They're like an 8′-rank of a keyboard instrument in this point.

Bass crumhorn and great bass crumhorn are rather unwieldy. This may cause signs of fatigue while playing them. Windcap of bass crumhorn is designed unfavorable too. This may cause lipping problems especially if a hard reed is used. A thumb holder and a neck strap those are common e.g on saxophones can reduce or avoid these problems. Thumb holder and strap holder shown below consist of a thumb holder and a strap ring for a saxophone (obtainable at instrument dealer/maker), in each case a rubber pad (obtainable in small amounts at modeler's shop) and some cable ties (obtainable at DIY centre or electrical specialist shop). Each rubber pad is cutted in one piece. Rubber pads protect the instrument against damages caused by metal and plastic parts of both holders and prevent holders from sliding. Plastic thumb holder for a saxophone is adapt to the round crumhorn tube by fixing some additional cable ties on it because the thumb holder for a saxophone is designed for mounting on a flat plate. Using black parts mainly make them quite inconspicuous. Mounting such strap holders and thumb holders is non destructive and therefore reversible. 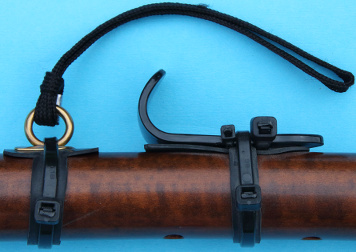